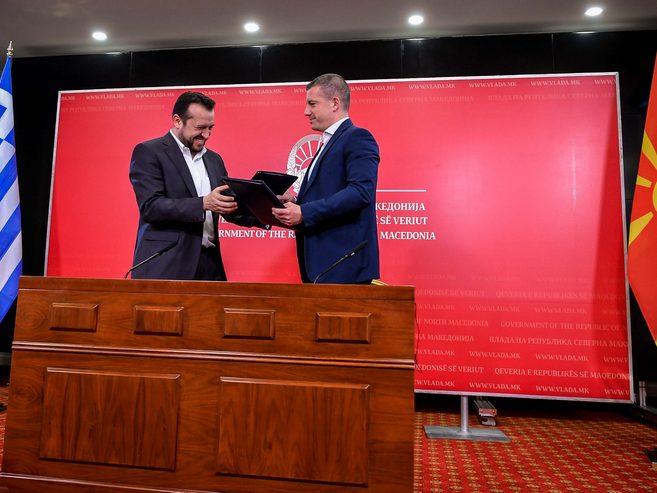 The roaming charges between our country and Greece should get decreased in the forthcoming two months i.e. before the start of the tourist season. This was stressed today during the signing of the Memorandum for understanding and decrease of the roaming charges between the Minister of Information Society and Administration, Damjan Manchevski and his Greek colleague, Nikos Pappas.

-Both countries’ regulatory bodies should determine the details i.e. the percentage of the decrease of the roaming charges. We shall put an effort either towards the end of May or at the start of June to offer concrete results regarding the Internet. The dynamics of decreasing the tariff will be ongoing by 2021 up until the roaming is completely abolished. The dynamics of complete abolishment will be happening with Serbia, Monte Negro, Bosnia and Hercegovina – said Manchevski.

In two months both countries’ regulatory bodies should come out with the initial results, about the percentage of the decrease and what would the prices be and if necessary to intervene in both countries’ legal regulations.

The Greek Minister Pappas said that by signing this Memorandum, the signing of the Prespa Agreement, an agreement should be made about the people, improve their lives, offer better opportunities for communication, transportation, economic opportunities. This visit, which is first of its kind, Papas has appraised as very useful.

-We had an opportunity to talk about other projects, exchange of technical knowledge, electronic movement of public administration documents. The areas that are opening in front of us are enormous. Our obligation is to use this positive moment and atmosphere, in order to bring a better life for the citizens of both countries in the future – said Papas.

He appraised that if the past period wasn’t missed, the position of both countries in the region would have been better and therefore, the processes should be speeded up in order to dissuade the opponents of the Prespa Agreement about its usefulness.

According to Manchevski, the people and the business have collaborated so far, and now the time has come for the politics to follow this spirit. He also announced other collaborations between both countries and other ministries, that will be of beneficial use for the citizens and the businesses.

The signing of the memorandum between the ministers was observed by a big number of Greek journalists.