According to the Slovenian State’s statistics agency, the average salary in the country, in May, was 1008 euro which is substantially more than salaries in other countries in the region, reports the media in Montenegro.

According to latest reports from the Macedonian statistics agency, the average salary in the country is 350 euro which puts us in the group of country with lowest salaries in the Balkans, such as Serbia where the average pay is 355 euro.

The average salary in Croatia is 749 euro, followed by Montenegro at 481 euro and Bosnia-Herzegovina at 424 euro per month. 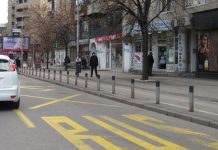