At least six websites, which are prone to reporting news with a propaganda intent in favour of the USA Republican Party Presidential candidate Donald Trump, have been discovered to be registered by Macedonians living in Veles!

According to the owners of these websites Veles is full of such websites, and similar “portals” looking for more clicks which means more profits. Five young people from Veles, who were contacted by “Meta” pointed out that financial reward is the strongest motive for registering such websites.

Some of those contacted said they were interested in politics and believe that Donald Trump will be selected as the Republican Party candidate for the Presidential race in the USA, but none of those contacted are members of any political party, domestic or foreign.

Each of these six websites were registered at the beginning of 2016, fully paid for with multiple services for domain registration, such as “GoDaddy”, “Emon”, “FastDomain” and several others. Following being contacted by “Meta” journalists, it was later discovered that two of the domains were, in fact, anonymously pre-registered from the same address in the state of Utah, USA.

The owner of one of the two domains usedailypolitics.com was, until 13.30 today, one Teador Indov, a 22 years old and a student at the Faculty of Computer Science and Engineering at Veles, who pointed out that the web-site worked on a click and visit basis.

“I though, what would interest Americans the most, and it was either this or rugby (American Football), some of the news I write, and other parts I take from other web-sites, I then translate them. I really don’t know if what I translate from other web-sites is true or not, I am only doing this because of the Google Ads” said Indov.

Although Indov claimed, over the telephone, that he does not know who the real owners of the domains are, the domains that are publishing pro-Trump propaganda, it mysteriously transpired, the owner of the usenewsflash.com domain, changed names, from Miron Brezev to an anonymous owner who just happened to live at the same address as the owner of “usadailypolitics.com” in the state of Utah, USA.

Mr Brezev told “Meta” that he was an English teacher in Veles, and that he mostly published stories concerning Donald Trump ” because that’s what people want mostly to read about”.

“Some of I write myself, some of it I translate from parts I take from other web-sites. I only publish news and nothing else. I mostly write about Donald Trump because that’s what people want, it seems , to read about the most, but I write for others as well” said Mr Brezev.

He went on to claim that he works alone on the web-site, and receives no help.

” I know that not everything is true that appears on the web-site, just like many Macedonian web-sites. But for every piece I’ve written I have added the source from where the story originated from”, said Miron Brezev from Veles.

The other three owners from the ‘pro-Trump portals’ did not pre-register their domains after we contacted them.
Marijancho Markov, whose name is registered for the website 365usanews.com, before he stopped talking to our journalists, he briefly said that this has nothing to do with Donald Trump and his only interest was in politics.

Mario Petrushev, however, who is the owner of worldpoliticus.com, introduced himself as a student of computer science, and pointed out that the website works for financial compensation from internet advertising and from “Google”.

“I have been working on the portal for a month now, before that I had others, but they weren’t successful, so I decided to create a portal which would affirm Trump’s politics, because I think he will win”, says Petrushev.

He says he does not personally know other people who have similar portals, but he had found them on the internet and knew of them.
According to the owner of usapoliticsonline.com, Sasko Dimov, who like the others, cut the telephone conversation short with us, said no-one could tell him what kind of portal he wants to open.

“From curiosity I opened the portal. If you are interested, I think Trump will win, and become a presidential candidate”, he said before adding briefly “This is all for a bit of fun really”.

The story of the Macedonian owners of these “Pro-Trump portals” was originally published by the Examiner whose author John Daniels, editor of the web-portal claims that these web-sites were created for the undecided voters and to encourage them to lean towards Donald Trump, and at the same time, to discredit Trump’s opponents in the race for the Republican candidate spot, Ted Cruz. 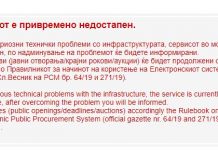