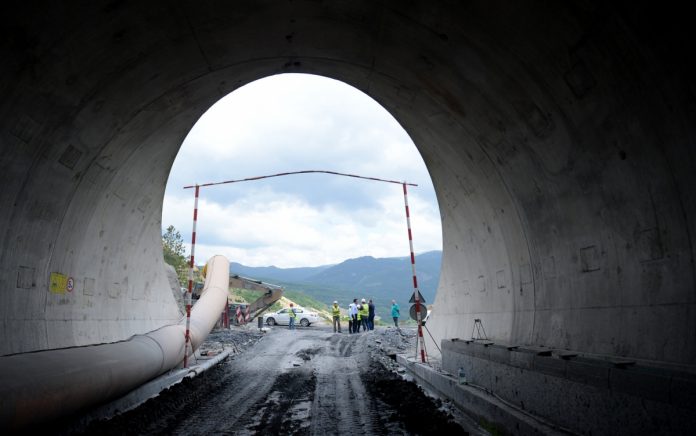 With the change of subcontractors and the redesigning of those segments that showed as left out or impossible for building, the highway between Kichevo and Ohrid was yesterday approved by the Parliament for a new loan by the state in the amount of 180 million dollars in order to finish the road in the length of 57 km. The MPs both from the ruling party and the opposition gave their support for the law with which the state will guarantee the return of the new loan issued by the Chinese Exim Bank.

We will have to return the loan in a period of 20 years, with a grace period of 5 years and a fix interest rate of 2% annually. In addition, the Chinese company Sinohidro will remain the main contractor for the highway while Macedonian companies will be subcontractors. With the new loan, the current cost for the building of the road is almost 600 million euros i.e. it is planned that 10 million dollars will be spent for the building of one kilometer of road.

The new loan will be used for the building of nine junctions for linking surrounding places with the highway. Also, the Chinese will be building an alternative road from the village of Preseka to Arbinovo, and will be removing all of the weak spots that appeared during the building of the Preseka tunnel including the most important issue – to improve all of the slopes in order to provide safety for the traffic.

In the past period, the construction works on the highway were of lower intensity due to the need of redesigning the highway, landslides and unused assets from the first loи неповлечените средства од првиот кредит во износ од околу 200 милиони евра. The Government concluded an annex with the Chinese which allowed the assets from the first loan to be used for the construction of those segments of the road that aren’t problematic.

So far, only 75% of the highway construction works have been finished and 96% of the roadbed have been excavated. By September 2020, the highway’s project documentation will be completed. The Government has already promised that next year 10 km of road will be put into use. The deadline for the final completion of the highway set for 30th of June 2021.