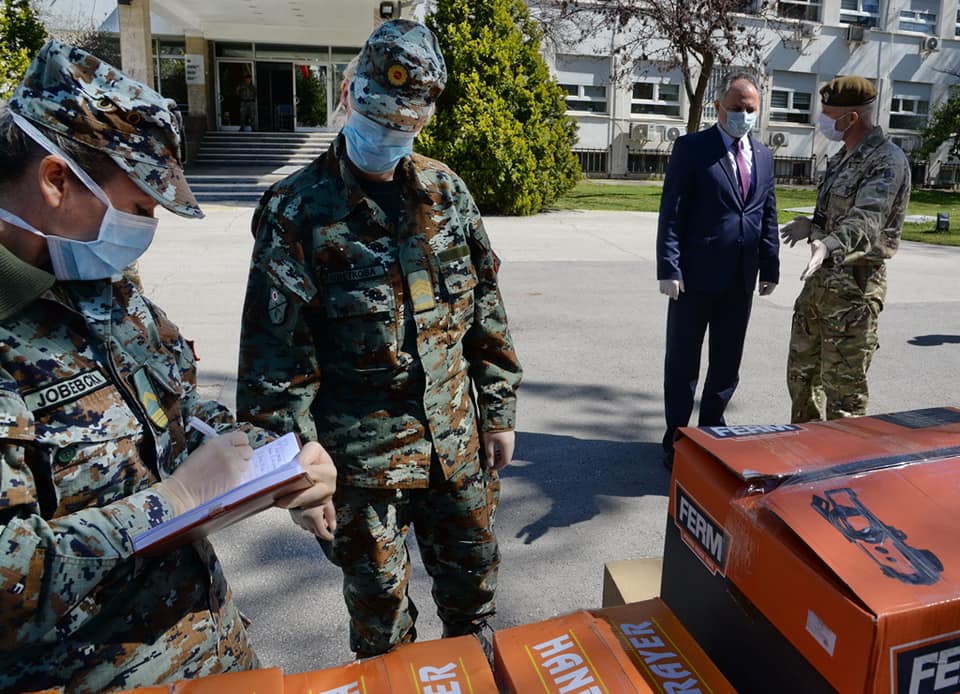 The Macedonian army received high pressure disinfectant pumps, hand held pumps for disinfection of smaller surfaces and other protective gear as a donation from UK in order to fight the pandemic. This is just a portion of the total aid that Macedonia will be receiving from its NATO allies.

“Today, the State Secretary Dragan Nikolik received the British donation that includes several types of high pressure pumps and hand held pumps for disinfection and protective gloves. The army takes care of its citizens and we are taking care of security and the protection of our soldiers” announced the Ministry of Defense. Today’s donation was announced yesterday the Defense Minister Radmila Shekjerinska after the video meeting with the British Ambassador Rachel Galloway, during which they talked about the situation with the pandemic in Macedonia and the measures taken by the state and especially the army.

“Today we are joining forces through solidarity. The British Embassy in Skopje donated equipment at the Ministry of Defense in support of their activities in the fight against the corona virus in North Macedonia. It is important to stand together in these difficult times” announced the Embassy.

As a NATO member, on the 30th of March, Macedonia has sent a list for necessary medical equipment and materials to NATO’s Euro-Atlantic Disaster Response Coordination Centre. The center coordinates the needs of its members with the possibilities, resources or the surplus of available equipment and materials of other members in order to help the countries that have a need of resources. Through coordination though NATO’s services, as aid for fighting the pandemic, The Czech sent protective gear in Spain and Italy, Luxembourg acquired a field hospital, Romania urgently imported 100.000 protective gears from South Korea with the use of special flight routes.