The legislature — and the legislative process — is one of the three pillars of democracy, enshrined in the very heart of the political system. The legal system and the lawmaking process both exist to protect the citizens of a democracy. Yet, Global Voices research published in the Unfreedom Monitor shows how authoritarian, as well as supposedly democratic states, use laws enacted ostensibly to protect citizens as tools to leverage people’s actions, words and very presence in digital spaces to curtail their free expression.

In Turkey, for example, each amendment of laws around the Presidency of Telecommunication and Communication (TIB) gives it more power to act unilaterally against citizens. In Zimbabwe, the Data Protection Act infringes on citizens’ digital rights and also allows the state to legally infiltrate online spaces. Russia has enacted several laws since 2012 to restrict and monitor internet use and free speech among citizens. The 2015 Cybercrimes Act in Tanzania allows the government to intercept data and seek specific personal data from internet providers. Meanwhile in India, a range of laws (some unrelated to the digital sphere) are wielded against vocal critics of the state.

This Global Voices live discussion at the intersection of law, technology, and democracy will be available via YouTube live on September 15 at 4:00 pm CEST (click here to convert to your local time zone).

The session is free and open to the public. Participants can register to receive a reminder about the event.

The discussion will be moderated by Ellery Biddle, former Advox Director and currently Consulting Editor at Coda Story, and feature the following panelists:

To learn more about the Unfreedom Monitor, a Global Voices Advox research initiative examining the growing phenomenon of networked or digital authoritarianism download a PDF of the briefing document or access the public database.

This article is based on original coverage by Global Voices. An edited version is republished here under a content-sharing agreement between Global Voices and the Metamorphosis Foundation. 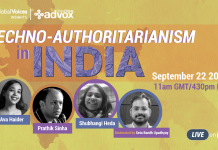