The formation of highly expert body in cooperation with the Ministry of Justice and the courts, will review the various laws relating to the Judiciary proposed the President of the Macedonian Academy of Sciences and Arts (MASA), Vlado Kambovski at today’s scientific and professional debate dedicated to a independent Judiciary.
Mr Kambovski pointed out that the issue of Judicial independence is not a matter of political option but a reflection of human rights and freedom in all its forms.

“Any decision which will come from political talks will not go along that line, science will always criticize it as unacceptable”, said Kambovski.
The President of MASA emphasized the importance of the report of the expert group of the European Union, led by Reinhard Priebe.

“On one side is the sacred judicial power is in the hands of the courts and presided over by the Supreme Court, on the other hand you have the assisting Judicial Council. The Judicial Council is not the peak of the judiciary, but is an independent body that guarantees the judicial authorities are set in a hierarchy” said the President of MASA.
German Ambassador Christine Althauzer, who participated in the debate, said that the election of a Special Prosecutor shows that things are not as they should be.

“It is necessary to discuss this topic that show things are not the way they should be. The fact that a Special Prosecutor should work on cases in other countries which are carried out in common prosecutions, shows lack of independence “ said Ambassador Althauzer. 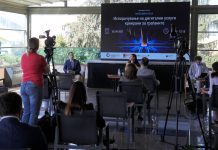 Debate on digitalization: There is a basis for fully electronic services, but much remains to be done