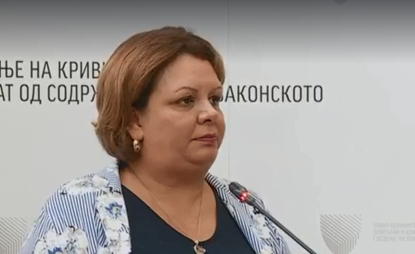 With full responsibility, I claim that I never abused my authority neither consciously nor unconsciously, neither by doing or not doing, and I didn’t misuse my duty that at the moment I’m still performing. Not only Bojan Jovanovski, but others as well have misused my name, said today Katica Janeva at the SPO’s press conference.

She appeared alone and after she read what she had previously written, left the press conference before allowing the journalists to ask any question.

She said her name was abused by Bojan Jovanovski – Boki 13, who is already into custody for the “Bribe” case, but that others also have abused her name. She called upon her colleagues from the Public Prosecution to solve the case.

“I encourage the judicial bodies to solve the bribery case. I expect this situation to be solved through a transparent procedure. Bojan Jovanovski was an acquaintance. I never hid the detail that my son works at 1TV, but that doesn’t mean someone should have abused me”, said SPO’s leading person, who had lodged her resignation.

In the end, she thanked the citizens and the media for their support for SPO’s work.

“I want to thank all of the citizens and the media, whose support helped us to work responsibly for the future of our country”, Janeva said.

Environmental tax on fuel stranded in Parliament of North Macedonia, number of diesel vehicles has risen by 160.000 in 8 years

Slag from Veles smelting plant exported to Turkey, soon it will...

Slag from Veles smelting plant exported to Turkey, soon it will...