Emergency evacuation is requested by residents of Lakavica region. Damn Mantova overflown, therefore Crisis Headquarters is urging residents to leave their homes, gather the livestock and head to higher ground.

The emergency call especially applies for residents of village Lakavica to go to the city, and the livestock to be taken as high as possible in mountainous areas, announced the Municipality of Shtip.

Kiro Madzhunarov, responsible for monitoring the hydrological condition of Bregalnica, announced that there was 35 liters of rain per square meter in Shtip until 12 pm today.

River Otinja, otherwise a dry river, has overflown in the center of Shtip. The two central streets, arranged riverbed and pedestrian bridges are flown with water. In Novo Selo, the damn of river Bregalnica caved. There is no damage to the homes of citizens, but it is expected the water of Bregalnica, which riverbed is slowly filled, to be overflown after noon. 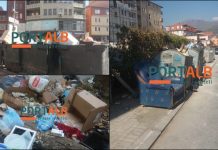 Municipality of Tetovo states it has used 122.000 euros from IPA funding in order to provide a cleaner city