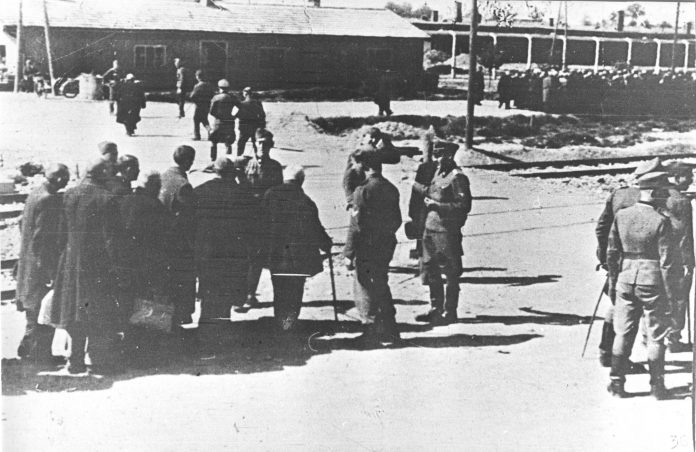 United Nations have declared January 27 as International Holocaust Remembrance Day, commemorating the genocide over 6 million Jews and 11 million others, by the Nazi regime and its collaborators during the Second World War.

On 27 January 1945, Auschwitz-Birkenau, the largest Nazi concentration and death camp, was liberated by the Red Army.

By presenting a series of original Public Domain photographs and their descriptions from the online archive Znaci.net, digitised from the museums of former Yugoslavia, Meta.mk and Portalb.mk support maintining of memory of one of the most horrific periods in the history of humanity. Remembrance is a precondition for prevention of the terror resulting from extreme nationalism which started through hate speech and backsliding from democracy.

The Auschwitz concentration camp was a complex of over 40 concentration and extermination camps operated by Nazi Germany in occupied Southern Poland. Of the 1.3 million people sent to Auschwitz after its opening in May 1940, 1.1 million were murdered with poisonous gas, through starvation, exhaustion, disease, individual executions or beatings, and during medical experiments.

Most of the prisoners were brought to Auschwitz in special railway transports, in cattle wagons with a bit of hay on the floor. After the prisoners would exit the wagons, the Nazs separated the men on one side, andthe women and children on another. Nazi “experts” conducted strict selection of the newly arrived prisoners, separating the infirm, sick, people with disabilities and children from those fit for work. (Part of these people were immediatelly sent to gass chambers without listing them into the camp evidence, which is thereason why the total number of victims and their identity remains unkown.) All belongings were taken from the prisoners and brought to the camp chamber called “Canada.” Block 10 in the Auschwitz concentration camp, where “medical experts” conducted medical experiments over the prisoners, so called vivo-experiments. Five crematoria whose furnaces burned 24/7 were built in the Auschwitz-Birkenau concentration camp. (Before retreating the Nazis blew some of them up in attempt to cover up their crimes.) Red Army units liberated about 4.800 prisoners of Auschwitz concentration camp who remained after their Nazi guards left. They included 108 Yugoslavs – the photo shows the members of the Mandić family with Soviet troops.

Nazis arrested the 10-year old Oleg Mandić, his mother and grandmother in their home Rijeka (Croatia) in May 1944 after his father and grandfather joined the partisans – the Yugoslav Communist anti-fascist resistance army. After severa months spent in jails in Croatia and Italy, they were sent to Auschwitz as “political prisoners.” They spent eight months in the death camp.

At first Oleg first spent two months laboring in the women’s section with his mother and grandmother. When the Nazis found out that he turned 11 they sent him to the men’s section. However, as he developed high temperature due to stress, he was sent to examination in the medical experiments ward run by Dr. Mengele where he stayed under examination several weeks. He learned to manipulate the thermometer and devised other ways to remain interesting as observation subject.

Oleg Mandić, his mother Neveka and grandmother Olga were the last alive prisoners who left Auschwitz.

This film, which Mandić saw for the first time 20 years later during a visit to Auschwitz, depicts the moment when they received a letter from Stalin’s assistant Nikolai Bulganin, ordering their transport to Moscow by truck via Krakow. In Soviet capital they joined a Yugoslav delegation led by Tito, returning with them to Belgrade by airplane on May 1, 1945.

Mandić, who is now 86, devoted his life to promoting the truth about the Holocaust. He led an antifascist NGO in Opatija, Croatia, organizing an exhibition, lectures, as well as annual group visits to Auschwitz museum on the day of liberation of the camp.

In 2015 at the occassion of 70th anniversary of the liberation he state that he still gets chills down his spine when thinking about „the notion that human mind was devoted to devising  industrial production of death.“