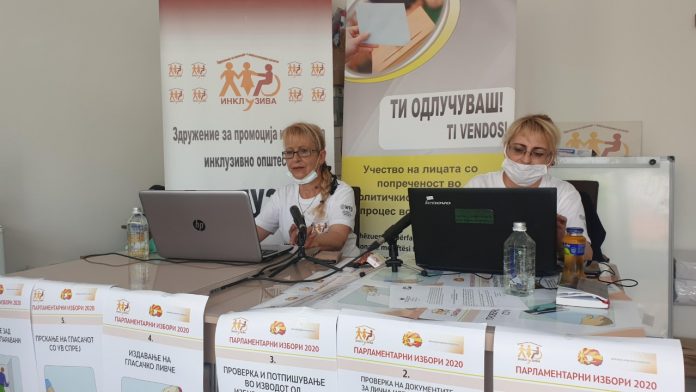 Association Inkluziva’s observers reported irregularities concerning the access to polling stations and the voting process for persons with disabilities. Non-observance of the protocols for protection against COVID-19 was also noticed at today’s snap parliamentary elections in North Macedonia.

“At 15 polling stations, members of election boards were noticed either not wearing face masks and gloves or improperly wearing them, at 21 polling stations, the physical distancing wasn’t observed and at three polling stations more persons gathered in a room than it is allowed to,” said the press release.

Further, the press release states that according to the observers, the main problem remains the access to the polling stations and the use of voting tools for people with disabilities.

“Observers inform that 20 of the visited polling stations aren’t physically accessible (they lack lifts or ramps, only stairs or barriers). The voting booths for people with disabilities aren’t placed accordingly at 22 polling stations i.e. they are either placed near a wall, blocked or haven’t been placed at all”, informed Inkluziva.

“At one location, it was noticed that a person accompanying a blind voter is casting a vote for the blind person but without his presence behind the voting booth. 10 polling stations lacked graphic presentations of the voting process. Four observers had a problem during the process of monitoring and communication with election boards, and at one polling station, an observer – a person with disability – was insulted by the Election board,” says the press release.

Inkluziva association is monitoring the parliamentary elections at 210 polling stations with 70 observers who are persons with disabilities.