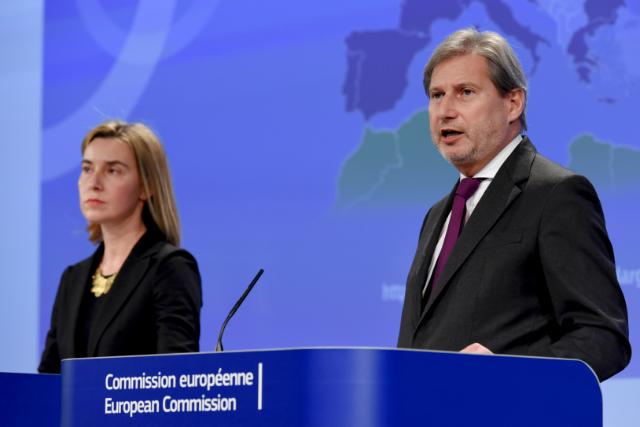 With many references to North Macedonia as a country that has made great progress, EU Commissioner for Neighbourhood Policy and Enlargement Negotiations Johannes Hahn, and European Commission Vice President Federica Mogherini, at a press conference in Brussels, presented the reports for 2019 on the progress of many countries, including North Macedonia.

Mogherini said that the country has made great changes, thanks to the political leaders and the citizens.

– North Macedonia has made profound, previously unseen, changes in the judiciary, the fight against corruption and organized crime and reforms in the security structures and the public administration. This reflects the will of the people, and by adopting this decision, the political leaders and citizens have decided to engage themselves – said Mogherini, pointing out that the assessments in the report are strict and precise.

She also pointed to the Prespa Agreement and the Agreement with Bulgaria, as a huge change made by the country.

-Based on the strict assessment, this year, the commission for the second time is giving its recommendations that are the bases of the report. The two countries did their part and now it is time for the EU to fulfil its part, with a recommendation from the Council to start negotiations – Mogherini said.

She said that five years ago, when the mandate of EC started, there were great challenges that seemed impossible to solve, but thanks to the new generations of leaders, they have now been overcome.

European Commissioner Hahn, repeated at the press conference, what he said previously at the session of the Foreign Policy Committee in the European Parliament, especially pointing to the Prespa Agreement and the Agreement with Bulgaria.

-The Agreement from Prespa solved a conflict that lasted more than 30 years. It seemed impossible to solve, but it has been overcome. North Macedonia not only continued with the most ambitious reform agenda but also with the Agreement with Greece, the change of the Constitution, reached to its neighbours.The same was the case, a year earlier with Bulgaria, when North Macedonia became an example of reconciliation and good-neighbourly relations, and is now the only country in the Western Balkans that has no bilateral problems – said the commissionaire.

He appealed to member states to have confidence in the reports, because they are based on solid facts. However, even if negotiations were to begin right away, years will pass to full membership, Han said, referring to the latest EU member, Croatia, which has been negotiating for eight years.

-I would like to repeat, the beginning of negotiations does not mean that we will end tomorrow or the day after tomorrow, years will be needed. It took Croatia 8 years and it is unrealistic to expect that the new enlargement will be faster – said Hahn.