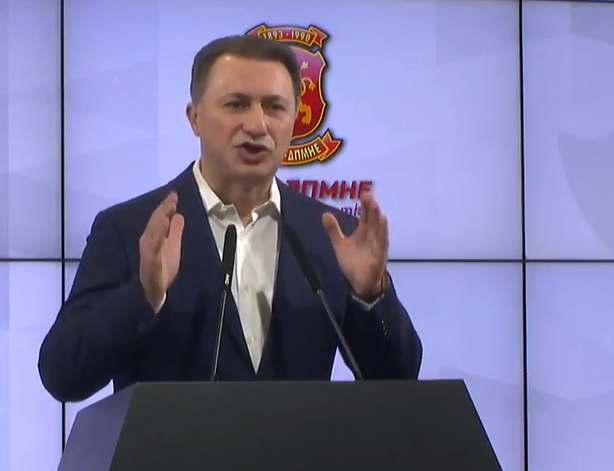 The former prime minister, Nikola Gruevski, a fugitive from justice hiding in Budapest, wrote on his Facebook page that last night’s arrest of former Director of the Public Security Bureau, Mitko Chavkov and the persecution against him is a personal vendetta against him because of the “Bribe” case.

Last night Chavkov was taken into custody because the Basic Public Prosecution had suspicions that he had the intention to escape to his villa in Halkidiki two days before the verdict for the 27th of April was to be read. One of the prime suspects, in the case, is Chavkov himself.

Gruevski said that the prosecution knows well in advance that the court will find Chavkov guilty and in advance, will demand his detention.

-Chavkov is innocent and is a victim of political prosecution and a political show trial. Like many others in that case which arose as a result of a conscious and planned illegal election of the Parliament Speaker, timed precisely as civil protests were unfolding each day, lasting less than two hours. It’s a process where Chavkov’s sentence as well as the others’ was first set and then the procedure and the trial followed. The trial is political and is a pure farce. Chavkov has bad health and with this step they’re consciously putting his life at risk – said Gruevski.

He wrote that Chavkov and Mijalkov had assumed a decisive operation on the 9th of May, 2015, in order to stop terrorists that were planning mass executions and terror.

-Members of this group have substantial control in the prison in Skopje. First, they attacked and injured former ministers Mile Janakieski and Spiro Risteski where SDSM has put Chavkov and Mijalkov, who for a long period were the main foundations of Macedonia’s security. When the incident was over, this group very quickly announced publicly on Facebook that each government official that was part of the government I led, will meet the same fate as Janakieski and Ristoski and that they will find me “at the end of the world.” – wrote Gruevski.

In the end he said that the court and the prosecution are captured and frightened and are being blackmailed by the government who are ordering arrests and convictions.