Meta.mk
MKD Group of MPs started an initiative for a single-member district

An initiative for a single constituency was formed at the Parliament that consists of 12 MPs from 10 parties and a single independent MP. During the meeting at the parliamentary MP club, that occurred on the 11th of September 2019, a group consisting of MPs who strive for a proportionate electoral model with one single-member district was formed.

“As MPs of the Initiative we request to be included in the process of amending the Electoral Code, to which we are obliged as a state after the OSCE/ODIHIR’s remarks from the last parliamentary elections. For that purpose, we have lodged a written request for a meeting with the President of the Parliament, Talat Xhaferi and the presidents of the three parties SDSM, VMRO-DPMNE, and DUI that are leading this process. We state that in this way a greater transparency and inclusivity of the whole process will be achieved as well as respecting the will of those citizens that expect a democratization of the country through changes of the electoral model” states the press release.

The press release also states that for almost 2 decades, since 2002, Macedonia has a proportional electoral model with six constituencies. According to them, the period is long enough to be able to see its positive and negative effects. 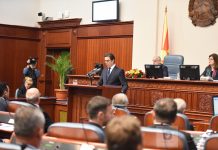 Macedonian President Pendarovski asks the next government to implement the venting process in the judiciary, the prosecution but firstly among the politicians