Instead of the initial fee of MKD 61 (€1, roughly) per square meter valid up to now, the privatization of the state-owned land for commercial constructions will be paid MKD 13,140  per square meter if it is implemented in terms of acquired ownership rights and is carried out through the Directorate for Property and Legal Affairs Administration, the government of North Macedonia ruled on the proposal of the Ministry of Finance.

The Ministry of Finance informs that the Regulation on the privatization of state-owned land, which is increasing the price of the undeveloped building land 30-fold for collective housing construction and commercial business facility, while for production facilities it is increased 20-fold.

However, the ministry clarified that the reimbursement for the privatization of the state-owned land which is planned for individual housing or collective housing that has already been built, remains unchanged – at MKD 61 per square meter. 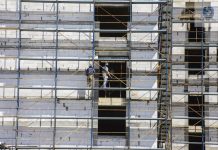 In November in North Macedonia a 14.4% decrease of the number of issued building permits

Even after seven years of building, no one knows when the first train will run on the Kumanovo – Beljakovce railway line