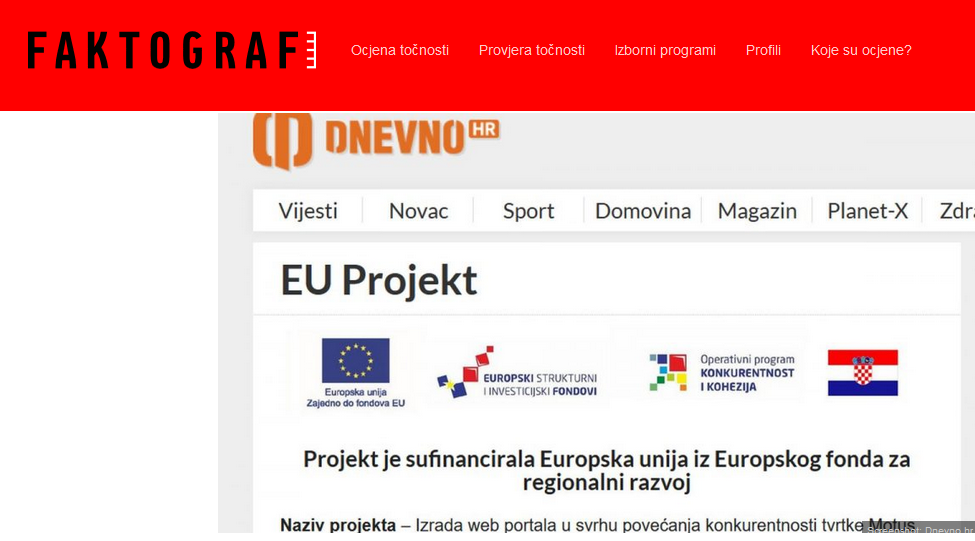 The fact-checking service Faktograf has reported on October 31 that the Ministry of Economy, Entrepreneurship and Crafts of the Republic of Croatia has given around 14.5 thousand dollars in subsidies from EU structural funds to the portal Dnevno.hr, “one of the leading producers of disinformation in  the Croatian media space.”  The money from the European fund for Regional Development  was granted for  redesign of their website in order to help their readers reach “the information of interest” more quickly and more easily, leading to increase of revenue for the publisher.

Faktograf blames the Croatian Government for using EU money to help a portal specialized for publishing disinformation, which often contain hate speech. The money to Dnevno.hr was granted after a call named “WWW vouchers for SMEs” (Small and Medium Enterprises) open in August of 2018. The grant contract  with the company Motus d.o.o., which is a publisher of the portal Dnevno.hr and several other digital media, has been signed in October 2018. The money was given during the mandate of the current Minister of Economy Darko Horvat, from the ranks of the ruling party Croatian Democratic Union (HDZ), who become minister in May 2018, after his predecessor Martina Dalić had to resign due to Agrokor affair.

Inciting Croatian citizens against the EU, while being financed through EU funds

Faktograf finds it ironic that EU money has been used to finance a web portal which regularly and frequently has been deceiving the public, in particular considering the kindof the disinformation. Dnevno.hr has been used as seeding site for disinformation that then circulated the social networks before the European Parliament Elections this May, with bogus claims about the European Commission president Frans Timmermans advocated “mass settlement of Muslim males” as a means “to achieve a goal of disappearance of one-nation states,”  they blamed German Chancelor Angela Merkel for attempting to deny Croatian sovereignty, they claimed billionaire George Soros is to blame for migrations from Muslim countries towards the European continent… None of these claims has been proven true, and they are just some of the disinformation that had been identified as untrue  by Faktograf, a reputable fact-checking service which is a certified signatory of the Code of Principles of the International Fact-Checking Network.

For instance, during October 2018 Faktograf published fact-checks of ten different disinformation items published by Dnevno.hr, all proven untrue. In some instances, bogus claims first published as far back as May 2017 had been recycled by repeated sharing over social networks. They range from climate crisis denial, to glorification of Russian President Vladimir Putin, to inciting tensions against refugees and migrants from Africa and the Middle East.

Faktograf used Freedom of Information (FOI) requests to ask the Croatian Ministry of Economy whether the jury that granted the EU money to the portal Dnevno.hr took into account quality and factual accuracy of their contents. The state intitution failed to answer the question and contrary to the law didn’t provide copies of the contracts with the  grantee demanded though the FOI requests.

The only information the ministry provided as a response by 23 October was a document with general description of the conditions of the call for the “WWW vouchers for SMEs” call. Faktograf repeated their demand on the same day, asking for the actual information, but has not received a response so far.

Faktograf also wrote to the European Commission, addressing the spokespersons in charge of informing about distribution of the money from the European Fund for Regional Development. Journalists asked if  spending European funds on disinformation outlets is legal, and whether member states can use the funds to finance people who spread disinformation and incite hate.

The European Commission responded that they can’t comment the specific case. Their official answer stressed that “fighting disinformation is joint and long term challenge that all EU institutions from member state need to face.” Unofficially Faktograf learned that the EU cannot do anything in this case because the initial rules for distribution of the money from European funds had not anticipated such a situation. Nobody thought  before that the provisions would need to contain explicit ban on spending the EU money for increasing efficiency of production of disinformation. By the logic that everything that has not been explicitly forbidden is allowed, it turns out that the Croatian government has not misused the money by giving it to the portal Dnevno.hr, with a goal of boosting their revenue in the future. Regardless of the fact that the portal blatantly lies its readers and spreads conspiracy theories whose purpose includes destabilization of the European Union. Faktograf editor Petar Vidov wrote that in this case it seems “acceptable to bite the hand that  feeds you.”

The portal Dnevno.hr is part of a media network founded by controversial businessman Michael Ljubas, known for the case of hostile takeover and bankrupting Elektroproment, a company from Zagreb which in its heyday had over 300 employees and almost 15 million dollars in assets. Ljubas founded the portal’s parent company Portal Dnevno d.o.o. in 2010, long before the term “fake news” become fashionable. The increase of awareness about the impact of disinformation as a mayor threat for the democratic civilization has not affected its business, including  use of European funds.

“Dnevno” means “daily” in Croatian, Serbian and Bosnian, and the media concern owned by Ljubas also included web portals with the same name in Serbia and Bosnia and Herzegovina.

Bosnian media fact-checking service Raskrinkavanje.ba maintains a database documenting sources of disinformation affecting the country with over 1500 entries. It includes the Croatian version Dnevno.hr with 23 entries, the Bosnian version Dnevno.ba with 14 entries, and the Serbian version Dnevno.rs with 3 entries ranging  from political manipulations to using sensationalism for click-bait to conspiracy theories to promotion of pseudoscience.

According to Faktograf, all three portals are infamous for inflaming nationalism and publishing disinformation. The Croatian version incites hatred against Serbs, while at the same time the Serbian version incites hatred against Croats, deepening the divide between the peoples whose states were involved in the bloody war following the breakup of Yugoslavia quarter of a century ago. Croatian Journalist Society warned in 2013 about the damage caused by the portal Dnevno.hr to the already polarized  Croatian society. “Attacks and defamation by that portal and to a lesser degree the printed weekly ‘7Dnevno’ against individuals, associations and groups who don’t adhere to their conservative right-wing positions bring our society to the 1990s and often lower the culture of public communication to the level of hate speech used by tabloids Slobodni tjednik and Imperial during and after the war,” stated the Croatian Journalist Society.

The orginal parent company Portal Dnevno d.o.o. filed for bankruptcy and had been closed down in 2019. One of the reasons why Dnevno.hr went bankrupt was loss of money on paying damages to people who sued it for defamation after publishing untrue and slanderous claims. However, the plaintiffs could not receive the damages because by May 2017 Ljubas had already sold the Dnevno.hr brand to Marija Dekanić, owner of digital marketing agency Logobox. She was former member of Croatian People’s Party (HNS), a junior partner of the Croatian Democratic Union (HDZ) in the current ruling coalition. Dekanić is owner of the company Motus d.o.o., the current publisher of the portal Dnevno.hr, which was the recipient of the resources from the European Fund for Regional Development for redesign of the portal.

All the contents of the website Faktograf.hr is available for republication if an attribution including a link to the source is provided, in line with the license Creative Commons 2.0.