On invitation from the Slovakian Minister of Foreign and European Affairs and OSCE’s President Miroslav Lajchak, the Head of Diplomacy Dimitrov will be taking part in at the OSCE’s informal ministerial meeting that will be happening today and tomorrow in Slovakia, informs the Ministry of Foreign Affairs.

The Ministry further informs that at the informal meeting of ministers of foreign affairs there will be a discussion about current conditions in the region and in the function of the regular ministerial meeting that will take place in this December in Bratislava.

“Taking into account the Organization’s long and successful activity, it is expected the discussions to focus on OSCE’s potential and the contribution to preventing and solving conflicts. Before the celebration of the 20th anniversary of the Istanbul summit when the Organization made key decisions to adapt to new conditions after the end of the Cold War, it is planed the ministers to talk about OSCE”s future activities in order to be able to respond to the ever increasing security trends and challenges” says the press release.

Apart from the participation at plenary sessions and working lunch, it is planed Dimitrov to have bilateral meetings with his colleagues. 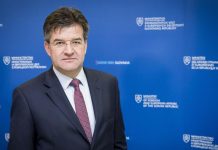