DUI’s assessment is that the elections were democratic and that the citizens have freely expressed their will, said the chief of the party’s election headquarters, Arber Ademi, as soon as the polling stations were closed at 19h.

-The government of Macedonia showed a capacity for organizing democratic elections. The voting is over now and the process of counting the votes has begun – said Ademi and he also said that as soon as the initial results arrive the party will share them with the general public. 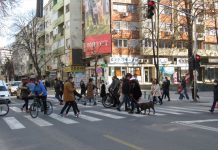