The disinformation poses a threat to North Macedonia’s security and all the factors in the society must work together to prevent the consequences. This, among other things, was said at the “Solutions and Next Steps – Recommendations for Joint Action” session of the “Dealing with Disinformation in the Republic of North Macedonia” conference, organized by Metamorphosis Foundation. This session was moderated by Portalb.mk’s Editor in Chief, Elida Zylbeari.

“My opinion is that all of us together as involved parties should act in coordination and be vocal. We who are here, we are the mainstream that has to win the war against the disinformation, since we are known, with names and surnames, unlike those who sitting in  basements and publish disinformation. We are more powerful than those people. The democracy is stronger than the disinformation, but it needs to consolidate itself. I plead to all the factors in the society to be vocal when someone is trying to misuse our national feelings for the sake of goals that aren’t democratic. The goal of the disinformation is to instigate conflicts, divisions, and, in essence, the people who are publishing the disinformation want to cause conflicts in the population,” said Marjan Zabrchanec, National Coordinator of the Open Balkans Initiative and other regional initiatives at the Government of North Macedonia.

The Executive Director of the Association of Journalists of Macedonia – AJM, Dragan Sekulovski, had a presentation on the spread of the disinformation and the abuse of the media for political propaganda. According to the data presented, just during the elections, the political parties have disbursed €5.1 million to the media.

He said that amendments should be made to the Election Code on the advertising by the political parties, but he also noted that the budget of the public broadcaster MRT should be increased, because, as he sad, not it is to small, i.e, it should be €40 million instead of the €11 million, as is now the case.

“We recommend that the parties should give up on the paid political programs in the media, to strengthen MRT’s financial and institutional independence, to improve the political culture, to support the self-regulation and the media should obey the Ethics Code,” Sekulovski said.

Mihajlo Lahtov, manager of USAID’s youth project titled “Youthink”, has called for raising the level of the media literacy education.

“One cannot find media literacy among the uneducated citizens. We cannot fight disinformation if we don’t have the kind of education that will provide media education. The cure lies in the education of young people. A large percentage of the young don’t want to know what is happening in the country. They don’t want to know how their municipality is spending the money, or how the government functions, either. They completely exclude themselves from the real world and marginalize themselves and are consuming fun media content. Young people often tell me “Everyone is the same,” “it’s stupid,” “I’m not interested,” and ” all of this is fake news.” I think that is not true and that not all the journalists are the same because in every profession there are professionals. We shouldn’t just continue with a rhetorical fight against misinformation, but include it in the media education, to make it part of our effort to introduce it into the system,  that in the future will make decisions based on more informed ways,” said Lahtov.

Xhabir Derala, CIVIL’s President, stressed that the issue of disinformation should be taken seriously since it is a threat to country’s security. 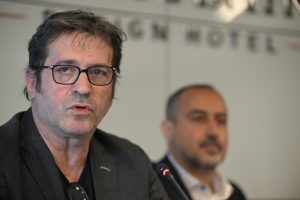 At the end of the conference, Metamorphosis Foundation’s Executive director Bardil Jashari gave the closing remarks, stressing that the problem with the disinformation is complexand this problem cannot be grasped by looking at it from one angle. What we need to have are long-term goals, political culture, dialogue or the creation of a society where all people will have basic skills for recognizing disinformation and propaganda, but that process will take a very long time.

“The problem is what we have to do now, and for that, we need to have short-term actions. This is a security issue as well – this is important for all people, institutions, and organizations to know, and action must be taken, because although we have projects and initiativest, if we work strategically we shall be more efficient, I think. It is important that the government and civil society organizations are open for cooperation. it is very important to start working together, and at the start to have a strategic document and to contribute within the limits of our authorizations,” Jashari said.