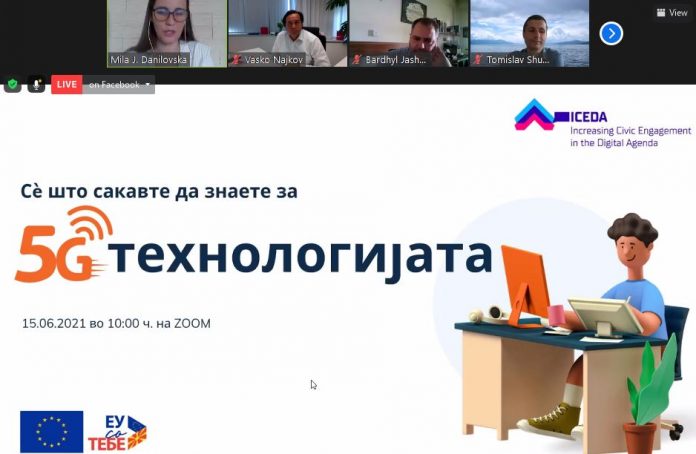 All the  scientific studies that were conducted or are underway all around the world including the measurements in the places where this technology is implemented, including the measurements during the tests conducted in Skopje, show that 5G technology has no proven adverse effect on people’s health or the living environment. It is always good to be cautious, to question the influences of various types of technology, but at the same time, we should pay attention to the results i.e. the numbers from the measurements and not just blindly trust the conspiracy theories. And the checks so far haven’t shown any negative effects of this technology which, in return, will bring many gains not only for the people and contribute for a comfortable and secure living, but also for the business, industry and even for the medicine.

Bardil Jashari, the Executive Director of the Foundation for Internet and Society Metamorphosis, Dr. Boris Arsov, Manager of the Sector for Telecommunications at the Agency for Electronic Communications (АЕC), Dr. Tomislav Shuminovski, Associate Professor at the Faculty of Electrical Engineering & Information Technologies (FEIT), and Vasko Najkov, Access Networks Director at Makedonski Telekom AD, in the online event talked about the various aspects of this technology, that is not yet implemented neither in North Macedonia nor in the Western Balkan countries, and whose introduction can be expected in the next few years.

The problem is the spread of disinformation by the uninformed

The biggest problem not only with 5G technology but also about the electromagnetic radiation from the 4G networks, which is the most advanced technology in current use, is the widespread dissemination of disinformation. It comes from the fact that the people are scared of possible adverse effects, which is normal and expected, but at the same time, they have little knowledge about the frequencies, for instance. This creates space for all kinds of nebulous claims among the general public, said the Director of the Metamorphosis Foundation, Bardil Jashari, who is also an electrical engineer.

“Healthwise, as far as I know, no state has reported such things, and one will it find it difficult to prove that something bad has been happening with the 5G technology and its effect on people. In North Macedonia, AEK and FEIT have done tests and I haven’t heard nor read any facts about bad effects, only conspiracy theories. This concern isn’t something necessarily bad – it means that the people have greater awareness and are demanding peace of mind before starting to use this technology. In its turn, this can only improve the security of this technology and devices. I consider this fear of 5G, this technophobia, speaks only of a lack of knowledge about various issues, like not having a clue about the frequencies, for instance. There are claims that the 5G devices have been overheating…Even an older device, if it is used continuously for 20 minutes, will heat up,” stressed Jashari. 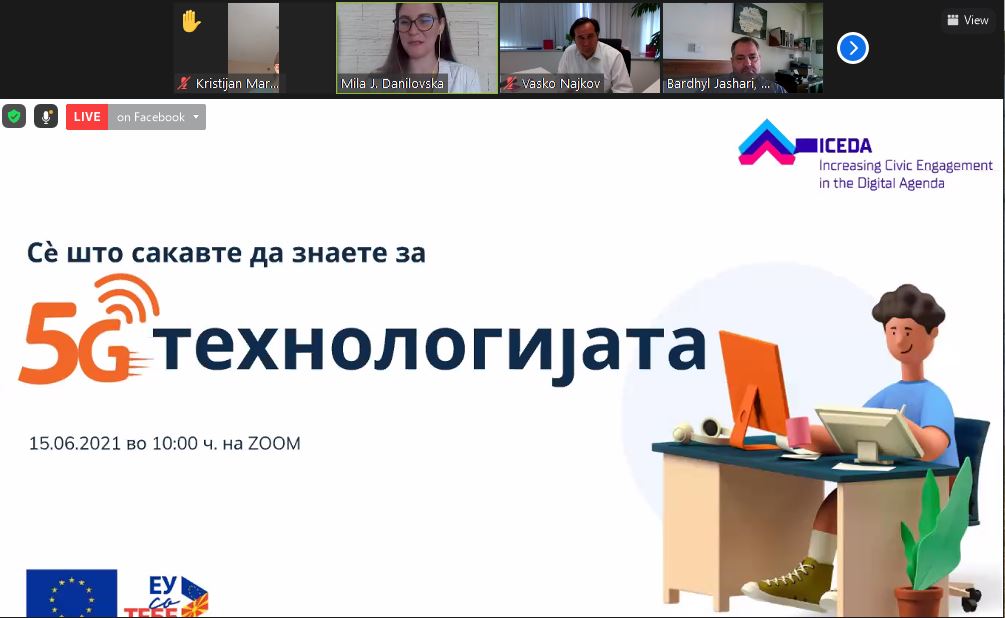 Assistant Professor Tomislav Shuminovski from FEIT also agreed that there should be no fear of 5G, nor of 4G, 3G or 2G, for example. He said that as a member of the academic community he is absolutely convinced that the electromagnetic radiation from the mobile antennas in North Macedonia is far from hazardous. On the contrary, said Shuminovski, as the measurements conducted by AEK have shown, even the highest levels of radiation measured were 15% below the maximum levels. Furthermore, the mobile telephony operators and the equipment manufacturers wouldn’t have any interest in selling something that kills people i.e. their users, he said.

“Anyone can see from the ranges of the frequencies that are planned for 5G, and they are close to the 4G frequencies’ ranges, anyone can read the researches and the reports from AEK’s inspections on its webpage. The highest levels measured were 15% below the ceiling. All sorts of reports and studies from all over the world are available and can be read…From all of the researches that I have seen, I can say there is no reported hazardous influence on the human body caused by electromagnetic radiation i.e. the waves from the base stations,” Shuminoski stressed.

The conspiracy theory claims, he said, remind him of someone who believes that the Earth is flat and is trying to convince a person who has been into space that our planet is indeed flat.

“This phenomenon with the 5G conspiracies looks to me as if someone who believes in flat Earth is asking questions, say, Yuri Gagarin, who was into space, and is trying to convince him that the Earth is flat,” Shuminovski highlighted.

The regular measurements show radiation below the maximum levels

Eventhe measurements during the testing of 5G technology in the center of Skopje last year by the two mobile operators, Telekom and A1, and all the previous measurements conducted by AEK in Macedonia since 1996, when the mobile telephony was first introduced, haven’t shown any readings of electromagnetic radiation from base stations above the allowed maximum levels, said Dr. Boris Arsov of AEK. There were exceeding values registered among the radio stations transmitters, but base stations for mobile telephony, all the measurements conducted by the Agency have shown much less electromagnetic radiation than the maximum allowed levels. 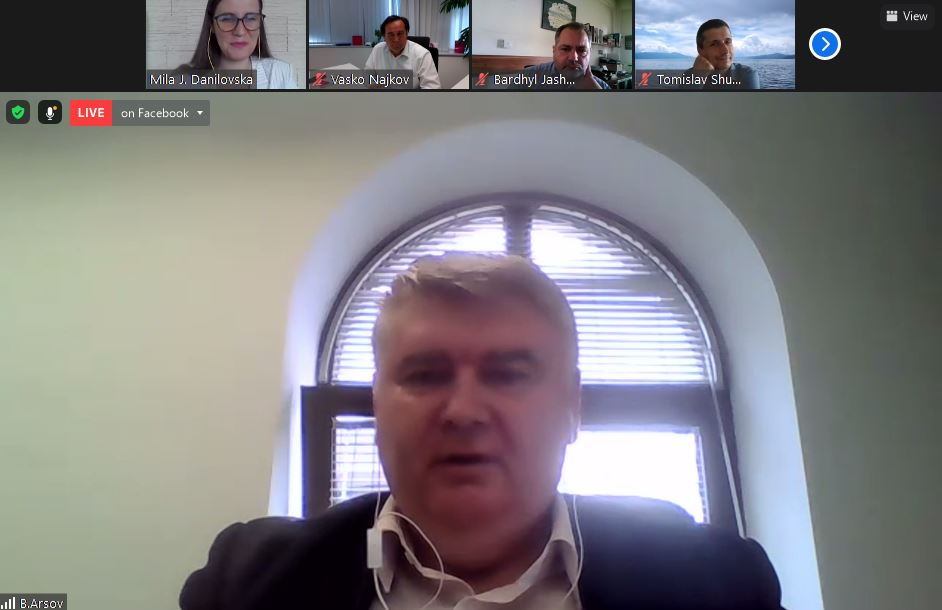 „AEK is conducting constant measurements regarding this issue, since this is a delicate subject – whether the non-ionizing radiation is influencing people’s health. Even regarding 4G, we are legally obliged to make regular controls and then there are the extraordinary controls, on complaint by a person or an institution. If there are problems, we can oblige the operator to remove them. There is also the instance of ascertaining controls, in order to see whether the operator has rectified the problem and so far we haven’t had a case when we have registered exceeding values. I can state with certainty that since 1996 AEK hasn’t sent an injunction to any of the operators about a base station with exceeding electromagnetic radiation.

All of the results that we have measured were within the normal values i.e. 10 to 100 times below the maximum levels. Our reports can be accessed on our website.

The only readings for exceeding levels were in the case of the radio stations in the FM spectre. This can be seen among the local broadcast local radio stations. Let’s say, if the radio station, for instance, has a broadcast license only for the territory of the city of Kavadarci and its transmitter is located on Ljubosh, but the swaves are reaching the cities of Gevgelija, Negotino, and Veles. We reacted in cases such as this. But concerning mobile telephony, AEK still hasn’t issued an injunction concerning exceeding levels of non-ionizing radiation,” said Arsov.

Regarding the dangers that the 5G technology could bring, Bardil Jashari stressed thel potential violations of human rights and privacy on part of the operators and other actors and stressed that the state authorities are obliged to produce laws and sub-laws that would prevent any illegal monitoring or wiretapping.

Regarding the gains from the 5G, the four speakers at the ICEDA event stressed the exceedingly higher speeds and much lesser latency of the Internet connection compared to the current ones< the possibility of using remote control in real-time in the industrial process, even for remote surgery. There are gains concerning remote control of home devices even when you are not at home as part of the Internet of Things. It was stressed that 5G technology will play an enormous role in introducing autonomous cars and trucks.

“5G technology will bring much greater speeds – from 10 to 50 Gbps second, and with today’s speed, the maximum is 200-300 Mbps,” illustrated Shuminovski.

Otherwise, as was stressed by Arsov and Vasko Najkov, even though the National Strategy predicts that by 2023 at least one major city should be covered with 5G technology, and by 2025  50% of the population, the final deadlines are still being defined, since they depend on many factors, but soon there will be more information.

At the moment, AEK is about to issue a call for a tender for 5G frequencies and all concerned parties can put objections or proposals. The content of the plan for issuing a tender can be seen here.