The Minister of Foreign Affairs, Nikola Dimitrov, remarked that President Ivanov’s statement that he won’t cast a vote at the referendum as “shameful avoidance of responsibility.”

During his speech at the United Macedonian Diaspora in Detroit, Ivanov said that 27 years ago he voted for an independent state with a dignity and he will not step away from the promise he gave in front of the citizens.

-As far as I’m concerned I already voted. I voted 27 years ago, on the 8th of September 1991. I was one of those who gave their vote to Republic of Macedonia in order to be constituted as a sovereign and independent state, with its own name and its own dignity. I’m not stepping away from my decision. Therefore, on the 30th of September, I will not go out to cast a vote. I received the citizens’ trust twice to not let any changes to the constitution in order to change the constitutional name, not to accept ideas and proposals that would jeopardize the Macedonian national identity, especially the Macedonian nation, the difference of Macedonian nation, Macedonian language and the Macedonian model of co-existance. I don’t back down from my promise. Therefore, on the 30th of September, I won’t come out to cast my vote 0 said Ivanov

At the moment, the President is visiting the US. On the 27th of Septemeber, where he is to address the 73 General Assembly of the United Nations. The President will meet the UN’s General Secretary, Antonio Guterres and he will have meetings with other state presidents, participants at the General Assembly. 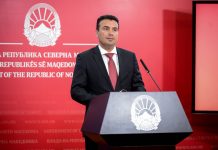 Zaev: The enlargement will be on the agenda in November but I will restrain my optimism