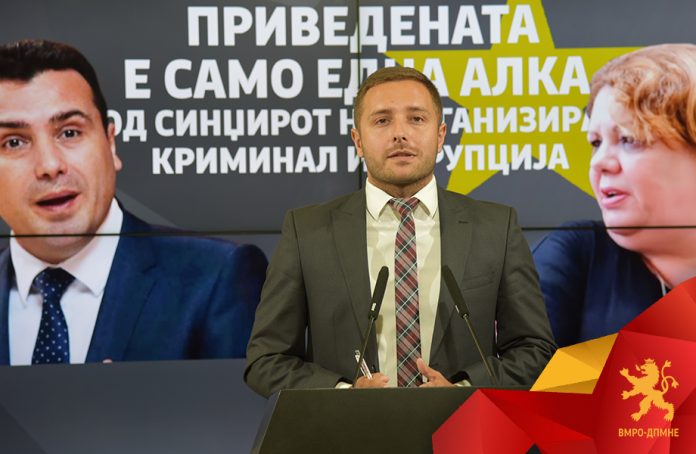 The government and the opposition have come out with diametrically opposite reactions after the special public prosecutor Katica Janeva’s arrest. The government’s spokesperson Muamet Hodza said today that someone will have to be held responsible for the Racket case for each person involved and demanding a thorough and independent investigation for this case.

Hodza said that today’s arrest of Katica Janeva confirmed that anyone is equal and held responsible when it comes to justice and the laws. He also said that the government will not allow the case Racket to be misused on part of the enemies of this country’s Euro-Atlantic integrations.

A similar statement was issued today by SDSM’s Kostadin Kostadinov.

We expect that the investigation will continue where the evidence will lead, to show all the details and no one will be spared, nor pardoned. All involved must be held responsible – said spokesperson Kostadinov.

He said that the ruling party SDSM encourages the authorized institutions to continue with an independent investigation regarding the Racket case.

The opposition party VMRO-DPMNE said that Katica Janeva’s arrest should have happened on the first day when the case Racket was revealed.

-During this time period since the scandal Racket was revealed and up until today there were 40 days in between and that leaves enough time for Katica Janeva to destroy any evidence or to hide, and to influence witnesses – said VMRO-DPMNE’s spokesperson Dimche Arsovski.

For VMRO-DPMNE, Katica Janeva is ” only an iron ring in a chain of organized crime and corruption through the Racket case. They state the claim by the Public Prosecution that both suspects have taken 8 million euros while prosecutor Janeva has taken only material objects in the amount of 4.500 euros as ridiculous and scandalous. The party repeated that they think the current scandal involves politicians as well.

And while the political parties argue, the Public Revenue Office (UJP) informed that it shall audit the work of companies such as “BMJ Media Group”, “Megjunaroden SOjuz” and “1TV” Broadcasting Service, all related to Bojan Jovanovski – Boki 13. UJP shall start auditing the companies on the basis of all taxes and mandatory contributions while the physical persons from these companies will be investigated on the basis of personal taxes.