Foreign Minister Nikola Poposki today stated that it was unclear why reporters protested yesterday for the release of journalist Tomislav Kezharovski when he had already been released from prison “Skopje”.

– Most of us do not understand what the protest was about because we know that all were informed that the person concerned is released. I think it would be wrong to bring conclusions for the overall picture based on a single case – said Poposki at a joint press conference with Foreign Minister of Austria Sebastian Kurz in Skopje, the media reported.

He added that “reforms in the media will continue and that all participants in the process have their own responsibilities.”

– So, they thought that the provisional release of journalist convicted for a text will change something? I really do not know how to comment that “awe” and “ignorance” of the minister and the others who don’t understand why thousands protested yesterday, except to repeat the words of Martin Luther King: “Nothing in all the world is more dangerous than sincere ignorance and conscientious stupidity.”- says Tamara Chausidis from the Independent union of journalists in the response to Poposki’s statement for META.

President of the Association of Journalists of Macedonia (AJM) Naser Selmani stated for META that the battle didn’t end with yesterday’s protest in front of the Government and announced further activities.

– We will make sure to keep the tension to the end, but we won’t reveal our further activities – said Selmani.

Journalist Kezharovski yesterday was suddenly temporary released from prison “Skopje”, to which he was transferred from house arrest on Friday night, a day after the verdict of the Court of Appeal, with which he was sentenced to two years of prison in the case “Liquidation”, was announced.

At the protest, representatives of journalists’ associations and journalists directed fierce message to the Government and openly expressed their doubts about the real reasons for the arrest, detention and conviction of journalist Kezharovski.

Apart from the decision to temporarily release the journalist from prison due to health reasons, the warden of prison “Skopje” sent a request to the Basic Court Skopje 1 for a parole for Kezharovski, on which the court should bring a decision in the next days. 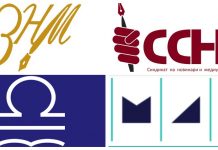