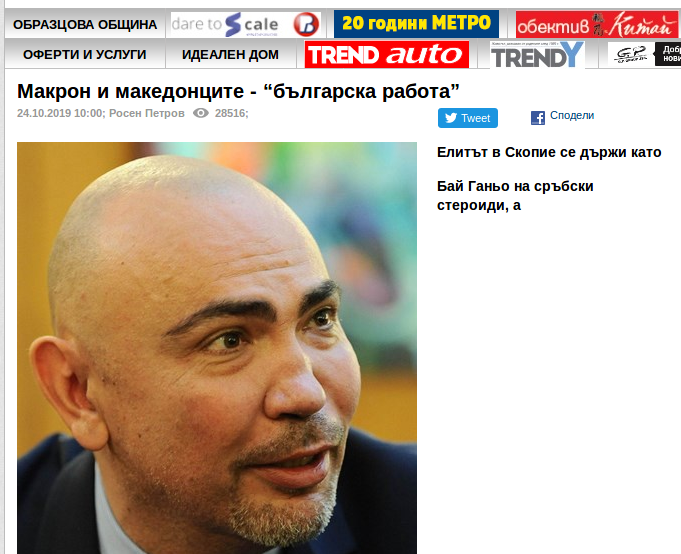 In an article published at the website of the Bulgaria’s daily newspaper 24 hours, Rosen Petrov, former MP and scriptwriter and current anchor of history show that is screened on the Bulgaria On Air online TV, writes falsities on the difficult and painful subject Bulgaria and Macedonia discuss – history.

In his column titled “Macron and the Macedonians – Bulgarian affair” Petrov uses sarcastic tone writing about when he write about France’s, i.e. its President Emmanuel Macron’s refusal to say yes to giving starting date for Macedonia’s accession negotiations, Petrov chauvinistically accused that “Macedonians are stealing Bulgarian history” and that the Macedonian historians (referring to the members of the Joint Bulgarian – Macedonian commission for historical affairs) and the political elite are showing “unusual, arrogant and primitive behavior”

Not commenting his “explanation” that the Macedonians were actually Bulgarians because they have the habit of causing harm one to another, which was a Bulgarian trait, these audacious attacks by Petrov will be refuted with facts.

Petrov’s thesis is many decades old and was and has been shared by a number of Bulgarian politicians, scientists, and public personalities. It states that the Macedonians are Bulgarians and their “separation” is a product of several factors that were adverse towards Bulgaria.

But the historical findings and the historiography do not support this restrictive thesis. Out of the many publications by Macedonian and foreign diplomats we can mention the book titled “The Macedonian Knot” by Hans Lothar Steppan, the first German Ambassador in independent Macedonia that speaks clearly about the straightforward self-declaration declaration as Macedonians by the population and some of its distinguished personalities in the 19th and 20th century.

But even many of his predecessors, diplomats from Germany, Russia, Austria-Hungary in the 19th and 20th Century in their reports inform about the population’s self-declaration as Macedonians.

We are going to cite the Russian Slavist and Macedonist (who, by the way, was native Bulgarian) Petar Draganov, who in 1900 reported:

“Should the Russians be happy or feel sad about the fact that in Macedonia the aboriginals call themselves with the ancient name Macedonians? My personal opinion is that it would be moral to provide support for this numerous tribe that speaks a special Slavic dialect and has its own ancient history that is no less interesting than the history of the Bulgarians and the Serbs….”