Macedonia has the support of Bulgaria for accession to the EU and NATO, said the Prime Minister Boyko Borissov after the meeting with the leader of the opposition Social Democratic Union of Macedonia, Zoran Zaev in Sofia.

– We insist that democratically, the political crisis will be resolvedand, and we are categorically against any calls for federalization of Macedonia – he said.

Borissov explained that the meeting was also attended by Foreign Minister Daniel Mitov and Janaki Stoilov from the opposition Socialist Party.

– The Macedonian government and opposition should find a common language, as required by Europe. We do not interfere in the internal affairs of the country, but it bothered us that there is a political crisis on our borders with a nation that is closest to Bulgaria. We organized a meeting in presence of the Bulgarian opposition, to show that in Bulgaria we are not divided into left and right when it comes to such problems – Borissov said after the meeting with Zaev. 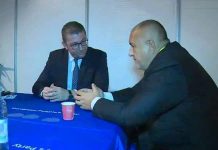 Counterspin: So what if Mickoski was a scholarship student in Germany – Hungarian PM Orban got scholarship from Soros, yet he still ousted him... 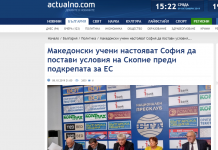 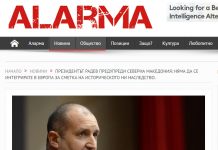