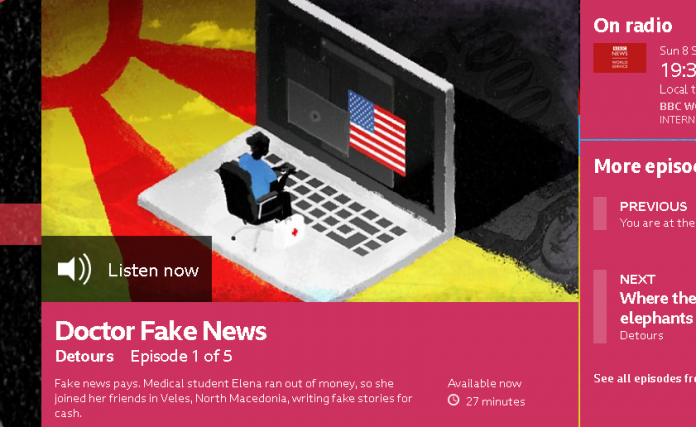 The British Broadcasting service BBC has published audio documentary on the subject of websites with fake news from Veles, North Macedonia titled as Doctor Fake News where it is reminded that the first medium that published official conversations with owners of the portals with fake news was Meta news agency .

Actually, it’s about a series of five audio documentaries named as Detours directed by the Oscar winning director Asif Kapadia and author of Amy, Sienna, Diego Maradona. The series is produced in cooperation between BBC and Robert Redford’s Sundance Institute. Author and producer of the documentary about Veles is David Borenstein.

The author stresses the story of the American digital media Buzzfeed dated from November 2016 as the moment when the fake news fabric from veles became famous. But he stresses that the subject was already covered previously in April the same year by Meta news agency.

The documentary follows the story of Elena, a medicine student from Veles who explains that working on websites with fake news brought more profit that working as a surgeon.

Veles, Macedonia: The fake news capital of the world

In the end, she stresses that one day she woke up and has decided that she doesn’t want to work this anymore and that this is not the way she wants to live her life and that she didn’t feel good in her skin.

“I want an opportunity to start a new life. I don’t see a future for myself” said Elena.

The author also states that “the fake news industry in Veles is now under water, but until your web page isn’t registered in Veles, the disinformation on the internet is still one of the most successful ways of earning on the internet”.