US Ambassador to Macedonia, Jess Baily at today’s lecture on the fight against corruption held at the University for Security in Skopje, said that he had heard that members of the State Election Commission behind closed doors, unanimously voted to receive four additional salaries after the local elections in October this year, reports the portal “Nova TV”.

“I heard that SEC members voted for an additional salary for four additional months for their work in the October elections, which have just ended. They have previously received additional wages for five months after the 2016 elections. The vote in the Commission was unanimous, among all parties and all ethnicities, the Commission staff received less bonuses. I am a public servant, I support rewarding public servants who work more than anticipated, but I have a question about this. The SEC are an independent body. Perhaps this move was even legal, but the voting was done behind closed doors”, Baily said.

He asked, what does this practice tell us about the priorities of the leadership and the values of the organization itself.

“Why am I saying this, what does this say about the values of the organization itself? Where were the whistle-blowers, investigative journalists or parliamentary oversight bodies? What would you do in this situation? said Baily. 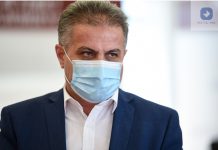