The resignations of two Ministers and the Head of Counter-Intelligence services were important, but certainly not enough, and that is why the formation of a Special Prosecution is there to investigate the issue of legal liability arising from the wire-tapped conversations, said the Ambassador of the United States in Macedonia, Jess Bailey in an interview on last night’s show “360” on TV “Alsat-M”.
“There is also a process in Parliament by the Inquiry Commission on the matter. It is not only important for accountability, perhaps it is more of a political question, but to come up with recommendations to prevent such events happening in the future. These processes are under way, they are very important, they are part of the process of accountability, not just the resignation of one or another person”, said the US ambassador in the interview.
Asked whether the Special Prosecutor can function without prior thorough reforms to the judiciary, Bailey believes it perfectly possible for Ms Janeva to do her job, as she has already begun to review the case to see if there is room for the case to press charges if necessary.
Regarding the fulfilment of the Przhino Agreement and negotiations, they are ongoing, and to conclude from it, Bailey says the agreement provides three essential things, and that is the return of political dialogue within the institutions, especially in Parliament, then to establish liability over the illegal wire-tapped conversations and their content, and the third thing – to provide credible and transparent elections. 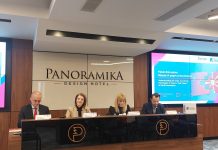