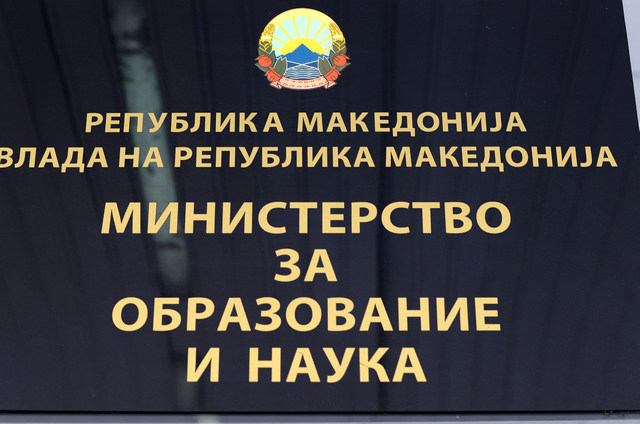 The resignation of the Deputy- Minister of Education and Science Petar Atanasov has raised new issues that have to be analyzed – why are the education reforms stagnating and why hasn’t anything been put into practice that was expected and promised in the past period?

Atanasov says that the main priorities in education for achieving higher quality haven’t been met and that if this tempo is kept, the education system would be reformed in 10 to 15 years. He had striven for digitalization of the education system, something that was rejected by the government as an option i.e. by Minister Arber Ademi.

The reason why the education system is sinking, why the reforms are stagnating and why no effort is put into solving the problems, we spoke to several people who are experts in this field that is considered to be this country’s main pillar.

-The Ministry of Education and Science is a ministry where results appear after several years. It is one of the most difficult and most complex institutions that has many target groups, various social categories, and different spheres. It is not a ministry where results can be achieved immediately. Each reform, including the one concerning the digitalisation of the education system, should be made in order to improve the system and not be a marketing tool. There should be a vision and a strategy for monitoring the labour market and to adjust to those needs. In order to achieve that, those that manage it will have to put more effort into it. I think that in the last few years the implementation of the laws was insufficient and it’s something that has to be changed. The current trends in our society have to be closely monitored because these are dynamic times, that are demanding agility and concrete solutions – said the former Minister of Education and Science, Sulejman Rushiti.

Professor PhD Kiril Barbareev, the deputy rector at the Goce Delchev University in Shtip and a professor at the Faculty of Educational Sciences thinks that the worst type of news is that politicians could lose the next elections due to issues related to the education system but they can’t win the elections with the education system because the results can only be seen in the long run, after their average administration and their perspectives.

-The whole essence of the education reforms lies here. The politicians know well that no elections are won with education. Therefore, according to experiences in other countries, the people that have led the reforms, the professionals, the teachers, have concluded that the politics is actually an obstacle in the process of building a better education system. Regarding the digitalization, it cannot be done is conditions such as these. No strategy was done for it. The digitalization denotes a reform of the classroom structure, and it has to be known which programs will be reformed. An entire digitalization concept is needed. For that one needs interdisciplinary teams from many areas that would be working on these problems. We would be introducing a digitalization and the school has no network.
You cannot allow a classroom with computer equipment of one type to exist in Skopje and have another type somewhere else in the country. Conditions must be equal for all pupils. Also, teacher training is another area that has problems too – said Barbareev.

Atanasov warned that the Ministry of Education is an inefficient institution, with too many bosses and devoid of any employees in its departments where there is more work. He said that the ministry is only using a small part of its capacities and that it has too many of its higher vacancies fulfilled whereas the important departments where there is more work necessary has its vacancies empty.