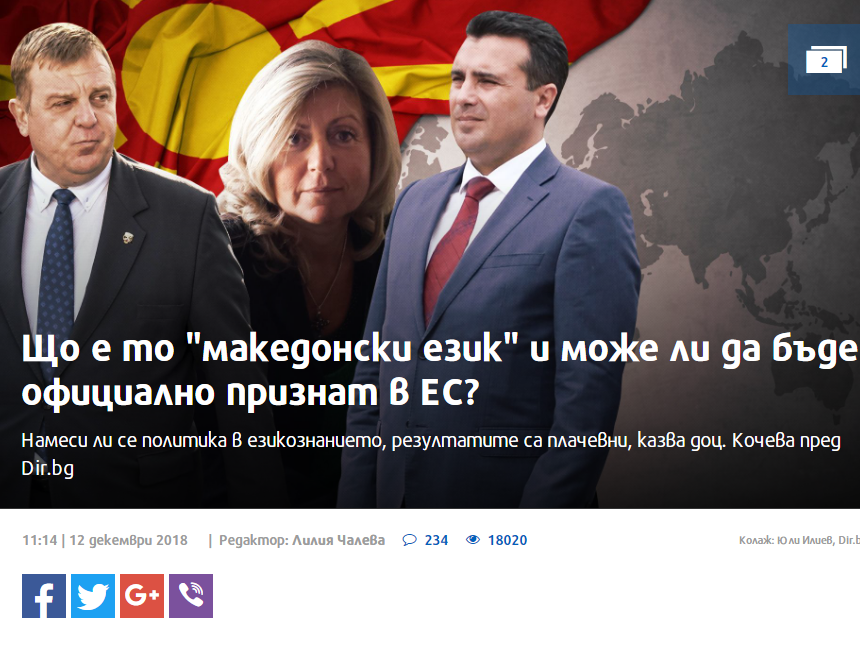 Associate Professor Ana Kocheva, linguist from the Bulgarian Academy of Sciences (BAN) in an interview with the web-portal “Dir.BG” published yesterday, said that the Macedonian language was created in 1944 as a result of Serbia’s partial success in a project to unite of all the South Slavs.

In the interview, the journalist speaks of “the Bulgarian character of the so-called “Macedonian language”. Kocheva claims that after the failure of Ilija Garashanin’s thesis, Serbia resorted to Stojan Novakovic’s “Macedonian doctrine”. Thanks to that doctrine, says Kocheva, Serbia managed only partially to realize its hegemonic program “by appropriating the Bulgarian population of Pomoravlje, Western Provinces and Vardar Macedonia”.

Regarding this last claim, the fact that a Bulgarian minority functions in Eastern Serbia today (Western Provinces, according to Bulgarian qualifications), which besides Bulgarian self-awareness has its own media in Bulgarian, points out that Serbia still failed to “appropriate” the Bulgarian population.

At the very end, the second proclamation of the Macedonian language, despite Kocheva’s message to politicians not to interfere in the work of linguists, is the Treaty of Friendship, Good Neighbourliness and Cooperation between the Republic of Macedonia and the Republic of Bulgaria, where the Macedonian language is recognized in the 1st and 2nd articles as an existing language.