The famous Alpinist, and long time resident of Ohrid, Ilina Arsova, who in May 2013 climbed Mount Everest which has a peak of 8,848 meters, in a public letter says Lagadin does not need a Mediterranean beach because the ground does not have a beach coast.
In her letter she directly addresses it to former Prime Minister Nikola Gruevski, who she asked to join her in the fight to preserve the natural rarities of Ohrid.
“So far, I have never asked for any reward or recognition for my work, where in another country I would automatically be pronounced as the first woman to put our national flag at the world’s highest peak. Well, Nikola, if you offer is still valid for assistance or service, I would like to use it to ask you to join us in the fight to preserve the natural rarities of this city! As well as your offspring but the whole world will be grateful and will bless you”, says Ilina Arsova. 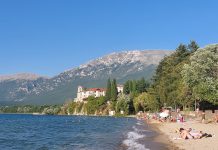 Ohrid and Struga crowded with tourists during the Republic Day holidays