The Subgroup for Reconciliation in Parliament has prepared a draft amnesty law that will be submitted to the Co-ordinative Body for Reconciliation today, and if accepted, the draft-law will be put into parliamentary procedure to be brought in via a fast-track process.

Zekir Ramčilović, from the independent parliamentary group of VMRO-DPMNE, who heads the subgroup, said that its members reached a consensus on the issue.

According to him, the draft law will not include the organizers and individuals who committed physical violence during the events of April 27, last year in Parliament.

“A distinction has been made, a legal formulation was found for the distinction between the individuals organizing the events of April 27, last year and individuals who took part in the violence with those who did not. Any person involved in the process of this amnesty, once the law is passed, will have to file a request to be granted amnesty – said Ramčilović. 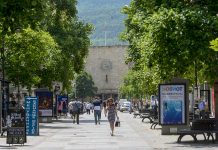