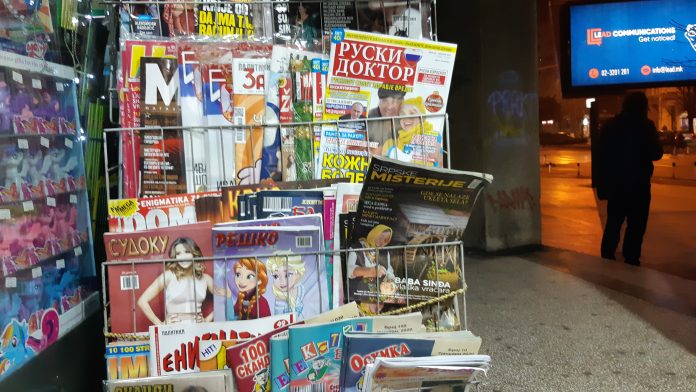 The network of magazines promoting the ‘brand Russia’ and Putin’s image in the form of alternative medicine advice continues to operate in most states following the breakup of Yugoslavia.

In April 2019, Meta.mk released an analysis indicating the impact of two magazine networks coming from Serbia, that are also distributed through direct exports to Bosnia and Montenegro and/or through local publications in North Macedonia, Croatia, and Slovenia in local languages.

The most prominent are “Russian Doctor” of the media conglomerate “Color Media Plus” and “Russian Herbalist” of the publishing house “Novosti“, which are accompanied by a number of other similar publications. Judging by the graphic design and the low price, their main target group is the older population, especially the retirees, who are at the same time important as a sound part of the electorate.

These magazines continue to commercially exploit the positive perceptions of Russia and its culture that were already present in some of the Balkan populations, further contributing to reinforcing the propaganda positions of Putin’s regime.

Thus, for example, in the latest, January issue of the Macedonian edition of “Russian Doctor”, the front page content is the “exclusive” article about “Putin’s 10 secrets to health”. Proper nutrition and morning gymnastics are presented as “secrets” in this article, but sports such as skiing, hockey, horse riding and fishing are mentioned, which are largely beyond the financial reach of the target (retired) audience.

The front page also introduces a “discovery” “straight from the Kremlin” that “Putin chooses traditional medicine”, announcing an interview with Putin’s personal doctor, Dr. Sergei Mironov, which despite the headline demonstrates a team of doctors that care for the Russian President by “developed medical-sports program”.

Presenting the 67-year-old Russian autocrat as a young, masculine and healthy athlete is one of the basic postulates of a propaganda narrative that presents him as a ruler with “extraordinary work ability and excellent performance”, according to Mironov.

Unfortunately, despite the “forever young”, populist, “eternal” and “irreplaceable” president/prime minister, the facts about Russia show that most of its people experience a decline in the quality of the health system and other state services.

“The London Times” recently suggested that one eighth of Russians survive with less than 175 euros a month and that “there is no sign that the gap between the rich and the poor will decrease any time soon.”

Financially unavailable to most readers are Putin’s favorite “potions” such as Spanish red wine and “special cocktails with a large amount of ice – 50ml champagne, lemon juice, mint, syrup”. For that matter, alcoholism is one of the most important causes of high mortality in Russia.

Contrast between propaganda for internal and external use
Given the fact that most of the contents of such magazines are taken from Russian originals, most probably through licensing, their contents give insight into what is being served to Russian readers. According to World Bank data on average life expectancy by country, Russia, with 71.6 years, is at the bottom of Europe’s level, which is an indicator of insufficient access to health services for the entire population.

Thus, the content promoting various “traditional remedies” distracts, at least part of the audience,from the quality or (un)availability of public health services, or offers some comfort or “alternative”. This propaganda tendency is useful not only for the Russian oligarchy regime, but also for the regimes of the Balkan states that have similarly degraded the quality of the health system in their countries.

However, the penetration of some of the content intended for Russian audience points to a contrast. Unlike the activities of the Russian troll armies spreading anti-vaxxer propaganda in EU and NATO countries, their allies and candidate countries, internally, in Russia, the state promotes vaccination. Thus, among other data about Putin’s health, “Russian Doctor”, according to Putin’s press secretary,informs that he got the flu vaccine.

Even the Russian Orthodox Church, whose views against compulsory vaccination represent a reference to Balkan anti-vaxxers, has dissociated from situations where the state would declare an epidemic. In addition to the propaganda function, the commercial pages of this magazine are filled with advertisements from various local and regional fortune tellers and healers who offer horoscope consultations or promise miraculous remedies and cures, including “cure for any cancer, with or without metastasis” by a certain “Doctor Cvetin”, who runs “the first online neuropathic clinic for cosmic medicine in the Balkans”. He claims to be diagnosing diseases via Viber or WhatsApp” in collaboration with a Russian colleague”.

The magazine ads contain many similar terms that sound scientific but have nothing to do with medicine,such as “medicinal herbal candies – a new kind of cell cosmic food”, “informotherapy“, “quantum medicine” by people photographed in white coats or with titles from “academies” – firms that are neither scientific nor medical institutions. The dubious credibility of the ads is also confirmed by the fact that the newspaper, on the third page, has repeated twice the following “information plus” which states that the publisher “Color Media Plus” and the editorial board “are not responsible for the content and the truthfulness” of the commercials, advertisements and promotions.

In this sense, “Russian Doctor”, in extremely small print, is trying to legally dissociate itself from lawsuits, stressing that “for the truthfulness of the ads are responsible only those who advertise it, and that for the quality of the products for a particular disease are responsible only those who recommend it as a remedy. Also, the editorial board and the company are not obliged to give any explanations in written or electronic form or by telephone.“