If transitional government is not arranged by 10th of June, the agreement for elections in April is canceled, reports “Nova TV“.

After the long and tense meeting between the leaders of SDSM, VMRO-DPMNE, DUI and DPA with Commissioner Johannes Hahn and US Ambassador Jess Bailey, who joined them later, it was announced that early parliamentary elections in April next year that will be organized by some kind of transitional government were agreed at the meeting. 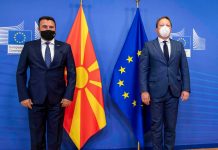