Meta.mk
MKD AJN: Media reforms to be returned at plan 18 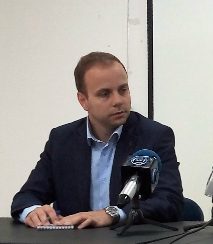 The Association of Journalists of Macedonia (AJN) is protesting because the government has erased the media reforms from the “Plan 18” with priority reforms.

“The government’s explanation that the media reforms are absent from the reforms plan because the changes and the additions to the Law of Audio and Audio-Visual Media Services have passed the government’s procedure is absolutely unacceptable. The passing of the Law for AVMS at the Parliament is a joint obligation for the government and the parliamentary majority” stated AJN’s press release.

AJN stated that the fight against the impunity for the violence on journalists has remained only as a political will and expressed intention.

We remind the government that its political will to fight against the policy of impunity of the violence over journalists hasn’t been accomplished. Out of 59 attacks on journalist only in 2 cases were the attackers sanctioned” stated the press release.