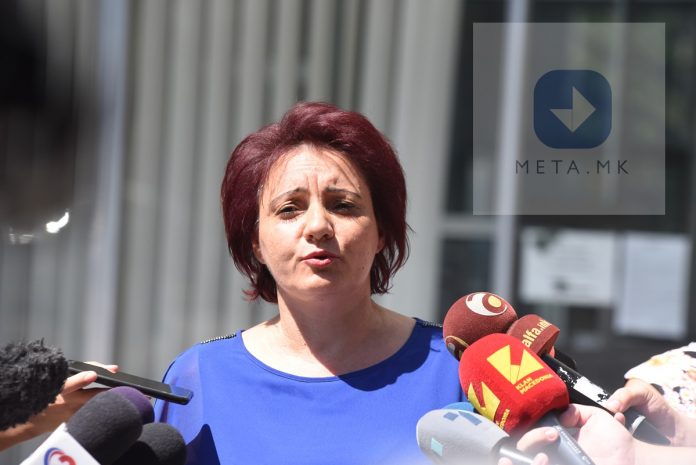 The public prosecutor of the Special Prosecutors Office Lile Stefanova, after five hours interrogation leaving the Prosecutor’s Office did not reveal details of her statement in front of her colleagues concerning the case “Reket” (“Extortion“).

Two persons – Bojan Jovanovski – Boki 13 and Zoran Mileski – Kiceec  – are detained, while the Italian newspaper “La Verità” publishes audio and videotapes of handing over money and telephone conversation between Orce Kamcev and Boki 13 and of the head of SPO Katica Janeva. In one of the conversations, Janeva says : “Without me, Lile (Stefanova) can do nothing”.

Stefanova didn’t reveal details on what she said and stated that all she could tell the public is in the statement which she gave last week on the webpage of SPO.

In her statement she explained that without her knowledge decisions were made concerning the case she is in charge of “Imperija” („Empire“), where the suspect is Orce Kamcev.

– I am completely aware of the great interest that the public has for “Reket” and all the connecting dots with the case “Imperija”, where the first suspect is a witness in “Reket”. All I could share was said in the statement on Friday. Today from 9 o’clock till now, as a witness, I gave a statement on all that I know in front of the prosecutor. Taking in consideration my status of a witness and the secrecy of the investigation, I can’t give additional details regarding what I already have shared with the public – Stefanova said.

Stefanova is the second prosecutor from SPO to gave a statement on the case “Reket”. Yesterday, prosecutor Elizabeta Josifovska was interrogated.