A large group of mostly young Macedonians, a few hours ago took to the streets in a counter-protest, 500 metres from where the DUI supporters had set up camp yesterday with the request to withdraw the decision to build the 55-metre cross in Butel.
Currently there is a strong police presence, and they are not allowing the group to reach the temporary camp on the roundabout.
The MOI informed the public that after assessing the situation they have sent an appropriate number of police officers in place to ensure public order and peace.
On Sunday, the foundation was set up for the cross on the initiative by the World Macedonian Congress (WMC).
The President of the WMC, Todor Petrov, on the same day was beaten in a Skopje cafe.
The WMC initiative comes after the two-headed eagle monument was established in the Municipality of Cair. 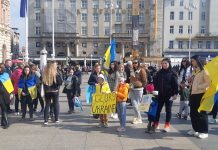 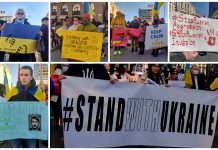